What is politics without rhetoric?

Since forever, politicians have been praised and criticized for how they speak (or tweet). What a world leader says on a public platform, and how their words are interpreted or translated, is of monumental significance. There’s the famous anecdote about how the second atomic bomb was dropped in 1945 due to a mistranslation; in response to the Allied Forces’ threat that massive destruction would follow unless Japan surrendered, Prime Minister Suzuki replied, “Mokusatsu.” It’s a word that can be interpreted different ways to imply “no comment” or even “not worthy of comment.” You can guess which one had more serious repercussions, and provoked the Allied Forces to drop the second bomb…

Frankly, I’m not a fan of this anecdote, and don’t believe in blaming translators for total warfare. I think Harry Truman and his pals have some soul-searching to do. But I do think that this anecdote (along with a couple more that you can read here) goes to show how important it is for us to always interrogate meaning, to perceive language as a medium that is constantly in flux. Instead of accepting that meaning gets “lost in translation” or thinking of a translated text (into English, often) as the endgame of the text, we should endeavor to participate in the process of translation as active readers. After all, translation itself is a productive and interactive form of close-reading. Translating requires brainpower; reading translations should, too.

Recall the famous riddle about having to ferry a wolf, a goat, and some cabbage across a river. Your boat can only carry one at a time, and you want to successfully bring everything across. If you take the wolf first, the goat you left behind will eat the cabbage. If you bring the cabbage, the unattended wolf will attack the goat. So, how do you get to the other side with everything intact?

The solution, which involves multiple trips back and forth across the river, has always reminded me of translation. It’s always going to take more labor (mentally and physically) for the translator to preserve the meaning of the original, to bring everything across the river of language. Sometimes, we can’t take everything with us; sometimes, the goat will eat the cabbage, the wolf will eat the goat. But with every trip across the river, you become a stronger rower, and the waters become more familiar. From a translator’s perspective, the riddle isn’t only about keeping meaning intact; it’s also about getting better at your craft through practice. And, as readers, it is by joining the translator on the trip across the river that we can empathize with the challenges of a translator’s task and realize the stakes of bringing meaning across borders.

I say all this because Hong Kong’s chief executive Carrie Lam has recently proclaimed the much-hated extradition bill to be “dead,” or “壽終正寢.” In the minutes following her declaration, the Hong Kong people have done the good and important work of ferrying across the river to unpack exactly what that means.

Hongkongers have been protesting since June against a proposed extradition bill that would severely harm juridical rights in Hong Kong and allow convicts in the city to be trialed in Mainland China (a country with a legal system that constantly violates human rights). Lam, who has shown little sympathy towards the protestors, finally declared yesterday that the law is now 壽終正寢 , “dead.”

If you were to read this headline in English, that the bill is now “dead,” you might not think much of it. After all, the word “dead” in English more or less means, well, “dead.” Consider the following headlines:

Here are various forms of “deadness,” all used in political contexts. But if we put our close-reading glasses on, we’ll realize something these headlines all have in common: “dead” always has a qualifier. Something may be “officially” dead or “basically” dead. Something can be dead “again” (so was it ever really dead??) or dead with a “but.” So, when Carrie Lam says that the extradition bill is “dead,” little sirens should go off in our heads, even when we’re just reading her words in English translation. Look at the original Chinese phrase Lam used, ” 壽終正寢,” and things get more interesting.

Chinese people love idioms, and 壽終正寢 is a particularly interesting one. It means to die of “old age,” to die of “natural causes,” to have “reached the end of one’s life.” I wouldn’t say that the bill died of “natural causes,” necessarily; one would like to think it was stampeded to death by the history-making protests that have swept Hong Kong’s streets. For this reason, many are urging Lam to revise her statement, and instead say that the bill has been 撤回: “withdrawn.” Cut out the wordplay and fancy rhetoric, HKers are saying, and express yourself in legitimate, political, legal terms.

Don’t get me wrong, I love wordplay. Especially in poetry. But in politics? I get suspicious. As Wong points out in the tweet above, the bill is not truly buried in the ground until it is withdrawn from legislature.

It seems that the wolf, cabbage, and goat have all been successfully ferried across the river multiple times in the past 24 hours. Translators have done the careful, interrogative work to interpret Lam’s words. We’ll just have to wait and see what she says next; and then the ferrying will begin anew.

Correction: A previous version of this article stated that Carrie Lam said 壽終就寢 , not 壽終正寢 . The article has been updated to reflect the correction; thank you to Julia Mak for spotting it!

One thought on “壽終正寢, 撤回, and Crossing the River of Language”

Short sleeve weather in California ☀️
@yilanfoods lived up to the hype 🙌 I know that the 牛肉麵 is the star of your menu but personally we LOVED the 滷肉飯 (braised pork rice, served with shiitake mushrooms). So good!!🇹🇼❤️
💛🎂
First time making fortune cookies!! Some actually look decent and they all contain joke fortunes 😂😂
I don’t always take my phone with me when I run, but when I do... 📸
I wrote about the affinity between the sestina form and literary translation. Grateful to @wwborders for giving this piece a home 🥰 link in bio! 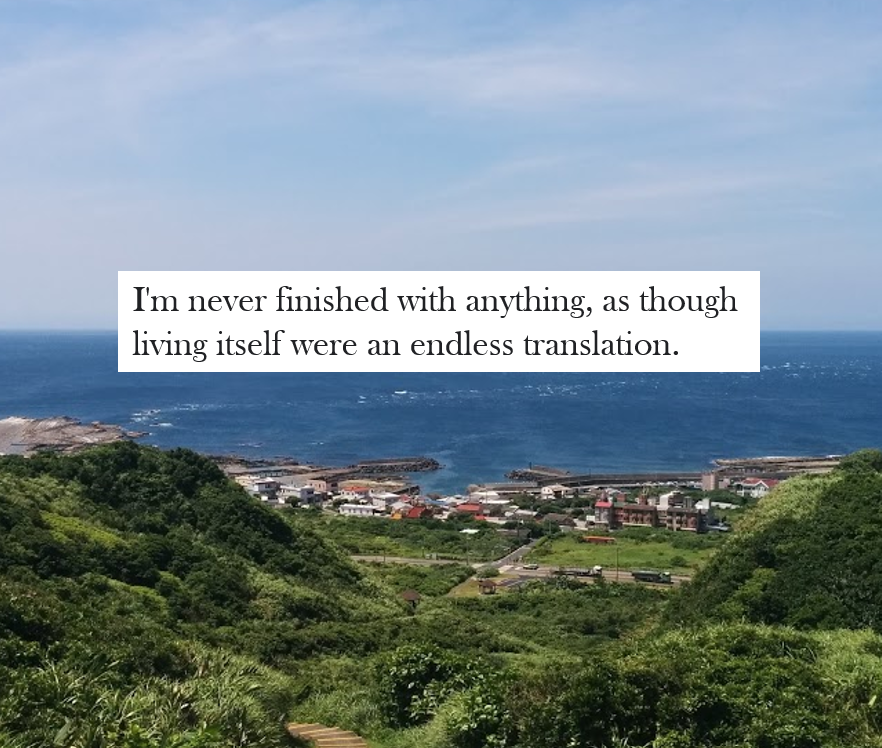